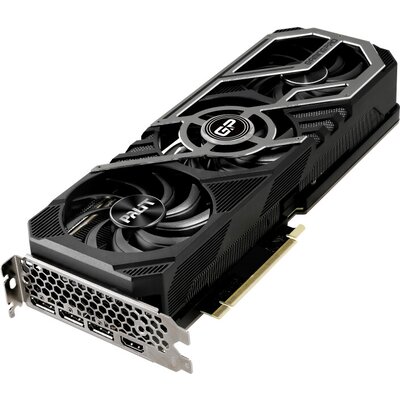 The GeForce RTX™ 3090 is colossally powerful in every way, giving you a whole new tier of performance. It’s powered by Ampere—NVIDIA’s 2nd gen RTX architecture—doubling down on ray tracing and AI performance with enhanced Ray Tracing (RT) Cores, Tensor Cores, and new streaming multiprocessors. Plus, it features a staggering 24 GB of G6X memory, all to deliver the ultimate gaming experience.

Two die casting molded “Aluminum Alloy Armor” plates fully cover the circuit board and directly attach to all the hot spots on PCB.

The heat pipes are specially formed into a double-U shape to enlarge the heat dissipation area. The efficiency of heat transfer is much higher than traditional heat pipe design.

Addressable RGB allows gamers to customize each LED color. You can personalized the lighting effects with Palit ThunderMaster software.

Keep Silent while you are experiencing the multimedia application and general workload. The operating fans only occurs while working on heavier loading.

DrMOS, originally only available for high-end server CPUs, is now available in all its glory in the next generation of Palit graphics cards. DrMOS offers high current circuits, low noise operation, and effective reduction of heat generating.

The design of honeycomb bracket increases airflow by up to 15%, allowing the heat generated from GPU to be exhausted via the honeycomb design bracket. This enables more efficient cooling effects.

Connect, play, capture, and watch in brilliant HDR at resolutions up to 8K with GeForce RTX™ 3090. HDMI 2.1 makes it possible for 8K resolution on a single cable. Capture up to 8K HDR footage with the GeForce® Experience™ ShadowPlay™ feature and play back smoothly with AV1 decode.

Ray tracing is the holy grail of gaming graphics, simulating the physical behavior of light to bring real-time, cinematic-quality rendering to even the most visually intense games.

NVIDIA DLSS is groundbreaking AI rendering that boosts frame rates with uncompromised image quality using the dedicated AI processing Tensor Cores on GeForce RTX™ This gives you the performance headroom to crank up settings and resolutions for an incredible visual experience. The AI revolution has arrived to gaming.